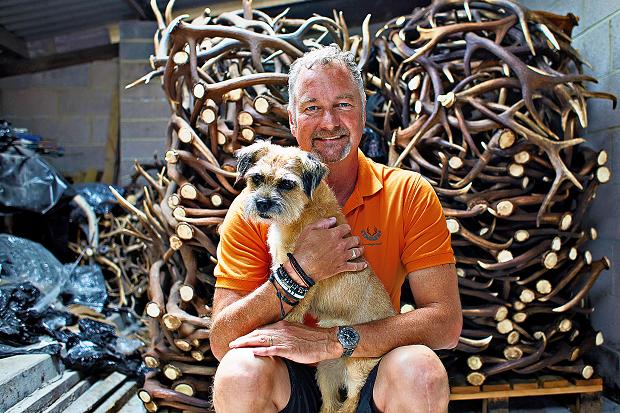 “It is always amazing how networking and contacts can open doors for all businesses” said John Palmer-Snellin. “My interview with Carly Chynoweth from The Times Newspaper and the SME Hub Report about our Dogged determination  has been a wonderful experience. Our original projections were based on the strength of a large chain’s orders I was fulfilling. Who knows where 2014 and 2015 are going to take us.

The idea for Staglers, which makes deer-antler dog chews, came to John Palmer-Snellin in an instant when he noticed how much his border terrier loved playing with antlers shed by his wife’s deer.

The company’s name, logo and branding strategy took a while longer. “I went to bed thinking about it for weeks,” says the retired police officer. His first idea was “Dogs Luv Antlers”, but when he discovered he could not register it as a trademark (visit ipo.gov.uk)  he had to come up with something new.

Once he settled on Staglers, he set up an e-commerce site. “Then we had to drive traffic to it, so we used a Google AdWords campaign,” he says.

Initially, his strategy wasn’t very successful, but, after consulting with his web designer, he adjusted the key words —  and when they are used, with Thursday to Sunday being the best days —  it became more effective.

Facebook also plays a big part in Staglers’ marketing mix. The Palmer-Snellin’s spends quite a bit of time “liking” and posting on the pages of other dog-friendly businesses. “Some of them have thousands of followers and they are excellent pet retailers, trainers, groomers and there are also some fabulous community sites, so we like them and they like us back,” he says. This means that when it runs Facebook offers, John can see order numbers rise.

However, not all internet-based connections are useful; he says it is important to always check the reach and credibility of potential online partners. “A lot of people offer a banner or web space but that does not mean it will increase traffic to your site in any great numbers.”

On the other hand, a real-world relationship with Bournemouth University has proved incredibly helpful. “Four students are using my company as part of a module in their tourism and marketing degree,” he explains. “Their assignment is to look at the business and see what they can do to improve it (through online marketing). It’s the sort of thing you would pay consultants a fortune for and it isn’t costing us a penny.”