Talking about the pain of your pet dog’s death and links which may help.

LOSING a pet can be as painful as losing a family member for many. It feels like a best friend has gone forever. The pain of loss can often feel overwhelming and trigger sadness and difficult emotions. While some people may not understand the depth of feeling you had for your pet, you should never feel guilty or ashamed about grieving for an animal friend. You have invested so much of your personal time, love, training and laughter in return for their companionship and devoted loyalty. Emotions and daily routines that shape us more than we truly realize. Biscuit, our Border Terrier, and I have a morning routine where I stretch and he gets lots of strokes and attention. Sets me up for the day!

Dogs weave their way into our hearts.

Recently, I was transfixed by an article written by Gordon Smart, Ex Editor of the Sun. The two-page spread was a tribute to the life of his family Cocker Spaniel who had died and left a family in grief and a huge hole in their lives.

I was lost in the honesty and sad beauty of his words. Gordon’s article also got me thinking. John’s dog Cassie, a clever, pretty, loyal Springer Spaniel joined our family when the children were small (Her story at the end of this editorial).

We wanted to share his article with you, so after leaving it a few weeks (so as not to intrude on their grief), I contacted Gordon. Not imagining there would be a response to my request – could Staglers let us share his story with you.  Imagine my excitement when he came back to me this week, giving permission. I  feel honored to share their family story with you. Please see below.

LOSING a pet can be as painful as losing a family member for many. It feels like a best friend has gone forever. Former Sun Showbiz ­Editor Gordon Smart knows all about that agony.

Here, Gordon, a presenter on music station Radio X, writes about the torrent of grief that has engulfed him since Fletcher’s death last week.

For 12 years, our day has erupted into action at the paws of our beloved cocker spaniel, Fletcher.

A frenetic, noisy and calamitous race to the door to let him out for his morning business. The most ­effective alarm clock on the planet.

By morning business, I mean those ­joyous bodily functions alongside a visit to the neighbours (as many as possible), a tsunami of slobbery love for anyone within 50 feet of the house then a pilgrimage through the local village looking for treats.

The wee rascal would be followed in hot pursuit by my disheveled wife, one of our half-asleep children or me — in a proper rage.

Regardless of who was chasing him, we would be in a state of undress with a series of apologies and a pocket full of poo bags. Not all of them empty. 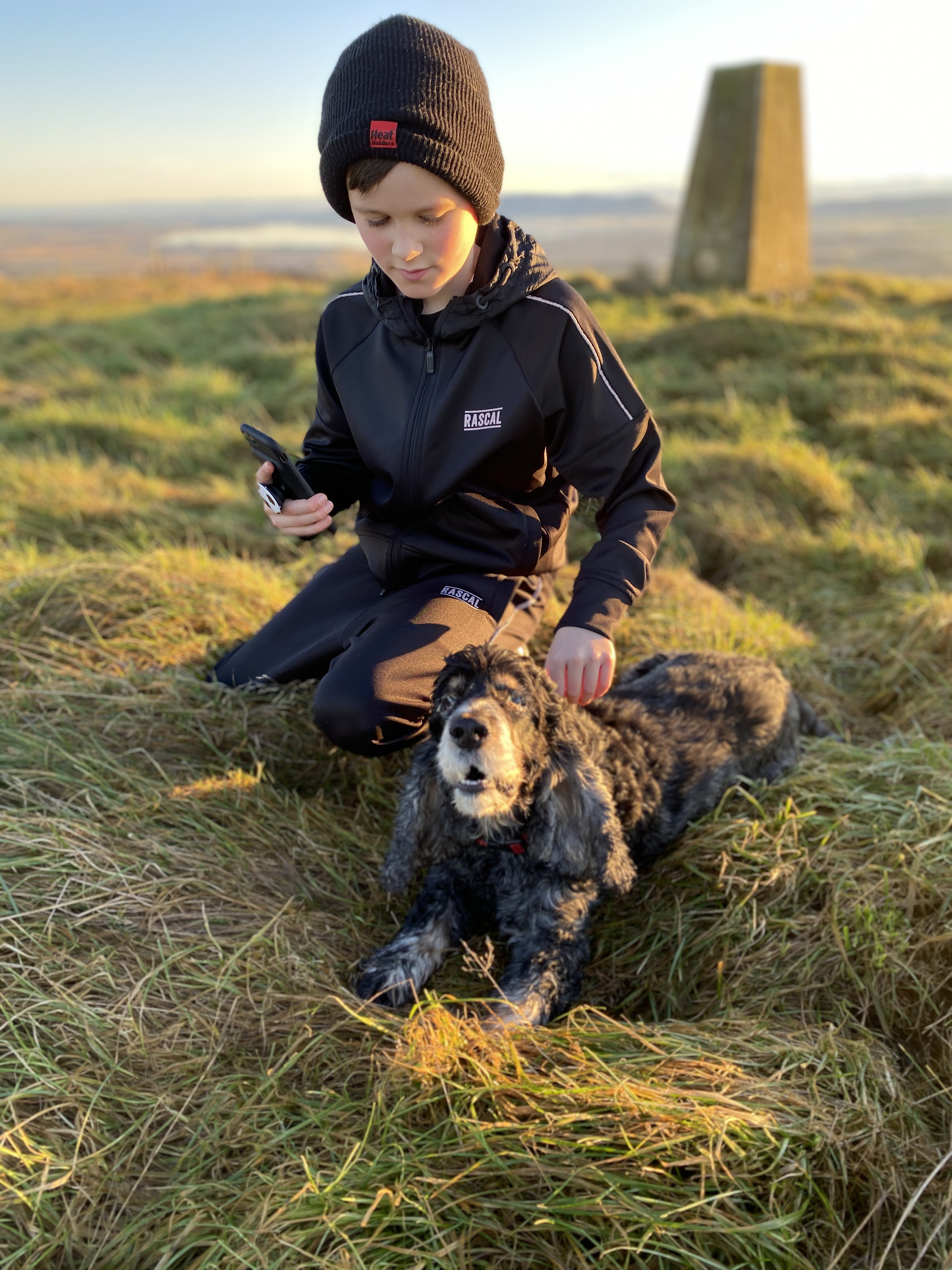 The father of two had to put down his beloved dog, Fletcher, after a long ­battle with illness Credit: Gordon Smart

We’d traveled to the vet’s together as a family,

dropping our two kids off at my parents’ on the way.

I attached his red leather lead for the last time, with the standard playful ­wrestle and resistance, and brought him into the vets.

It’s a building he had become too familiar with in Kinross, Scotland, where we have lived for the last six years.

He was greeted, as he always was, with enthusiastic cuddles followed by his ­signature move — a roll on to his back to get his tummy rubbed.

He had no idea what was coming, and after weeks and months of agonizing about the big decision, it was suddenly staring us in the face.

My nine-year-old son, Jimmy, had said recently that it was almost time for Fletch to get “the sting in the paw”.

For the past eight years, we have fought a losing battle with ear and eye infections common in Cockers.

He was pretty much blind and in pain from his ears that he bravely battled through for the last 18 months. My wife finally sat me down before Christmas and said through tears and snotters that she thought it was time. It was the hardest decision of our lives. The vet’s had become the equivalent of Fletcher’s local pub.

He was on first-name terms with all the staff, ­popping in for potions and concoctions to battle his pain.

The battle-hardened animal lovers in there were unraveling as the time came.

He was more than just a patient to them, too. This was the Marley & Me moment I had feared since I first saw that bloody film. I remember seeing the movie poster for it before I saw the film and someone had scrawled “THE DOG DIES” on it in black paint.

Anyway, Fletcher was ­getting old. In dog years. with each one said to count for seven years in human terms, he was about to turn 84.

I was clinging on to ­stories of cockers who had lived to 17. I just couldn’t comprehend life without my best pal. But the time had come, and it was the right thing to do. He had a brilliant life, full of love.

He was our first child.

The classic test before we took the plunge with kids. To give you a sense of our connection, I need to take you back to the very start. Get the hankies ready — I’m already blubbing, writing this.  I married my wife Kate, 38, back in 2003. She came from a family of dog lovers.

Her first pet was a Great Dane called Fergus who had to be re-homed because he destroyed her house when she was only six. The day he went to a sanctuary was a tearful tattoo on her memory.

She then went on to have a beautiful golden retriever called Murphy. I ­remember when Murphy was a pup, brought home by Kate’s mum, Mary, when we first started dating in 1998.

When we got married, Mary’s friend Margaret Addison, a dog breeder from Fife, owned a litter of cocker spaniel pups. We lived in London at the time but were home for Christmas in 2008. 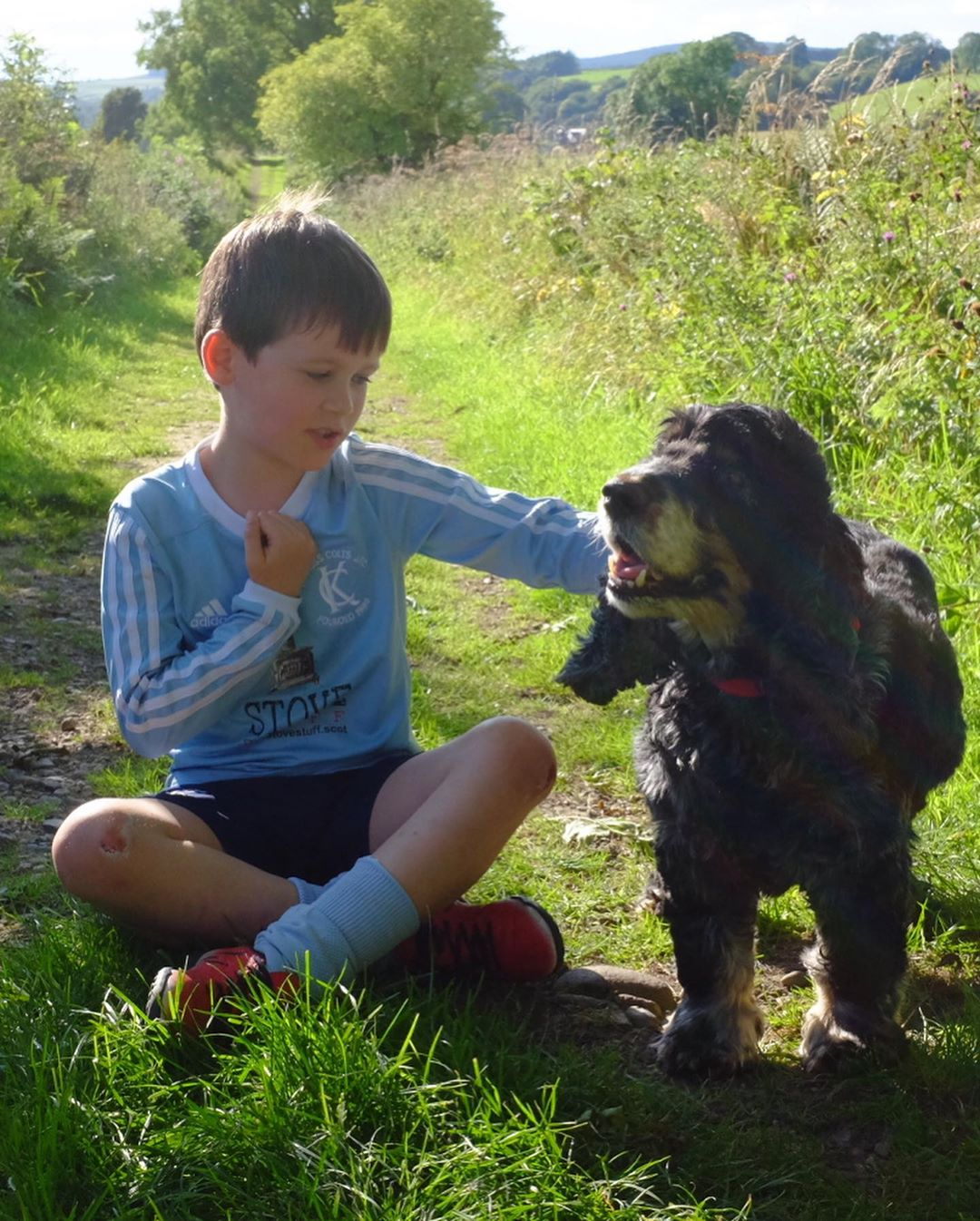 Mary took Kate to see the pups and Margaret offered Kate the pick of the ­litter. The next thing I knew, we had a new member of the family.

Before I knew it, I was besotted with my new pal, Lord Fletcher of Lochran Moss, to give him his full Kennel Club title.

He was very nearly called Dexter

Dexter after ­Dexter Fletcher from Press Gang and Lock Stock. But Hibs had a brilliant striker at the time called Steven Fletcher, so that won the day for us.

I was Showbiz Editor of The Sun at the time. When I got home at 3 am he would be there waiting for me to play. He nursed me through some of the worst hangovers imaginable. He was also there for me, unflinching when times were bad.

It was a stressful time and I was growing up. Thank God I had him there for endless walks and cuddles.

We didn’t know at the time,

but Mary had been diagnosed with cancer. Within a year, she had died. It has been one of the hardest parts of losing Fletcher. He was one of my last ­connections to Mary, and he brought us so close together.

I’ll never forget ringing her in a panic when he was still a pup. I’d stupidly tried to take him back to London by train from Edinburgh. I had a suitcase, a set of golf clubs and Fletcher. On my own.

Standing room only, for eight hours (engineering works) on a hot day. It was brutal. Trying to time his bathroom visits was slapstick viewing for the animal lovers on the train.

For everyone else, it must have been so annoying. He would time a code brown just as we arrived at York or Doncaster. I’d be trying to pick up the poo while he played, oblivious to the madness around us.

But when we got to London he just stopped moving. He was faint, fell unconscious and limp in my arms. I rang Mary in a panic. “I think I’ve killed Fletcher!!!”

She calmed me down, helped me find a vet over the phone and I raced to an ­emergency centre in town. The vet took a look, inserted his finger where I thought he shouldn’t and popped some vitamins in. Hey presto, back to normal, sniffing around and playing again as if nothing had happened.

I was absolutely broken by it. I realised it was true love. Over the last 48 hours, the memories have flooded back. The connection with my son and six-year-old daughter ­Laurie was the greatest thing to behold. 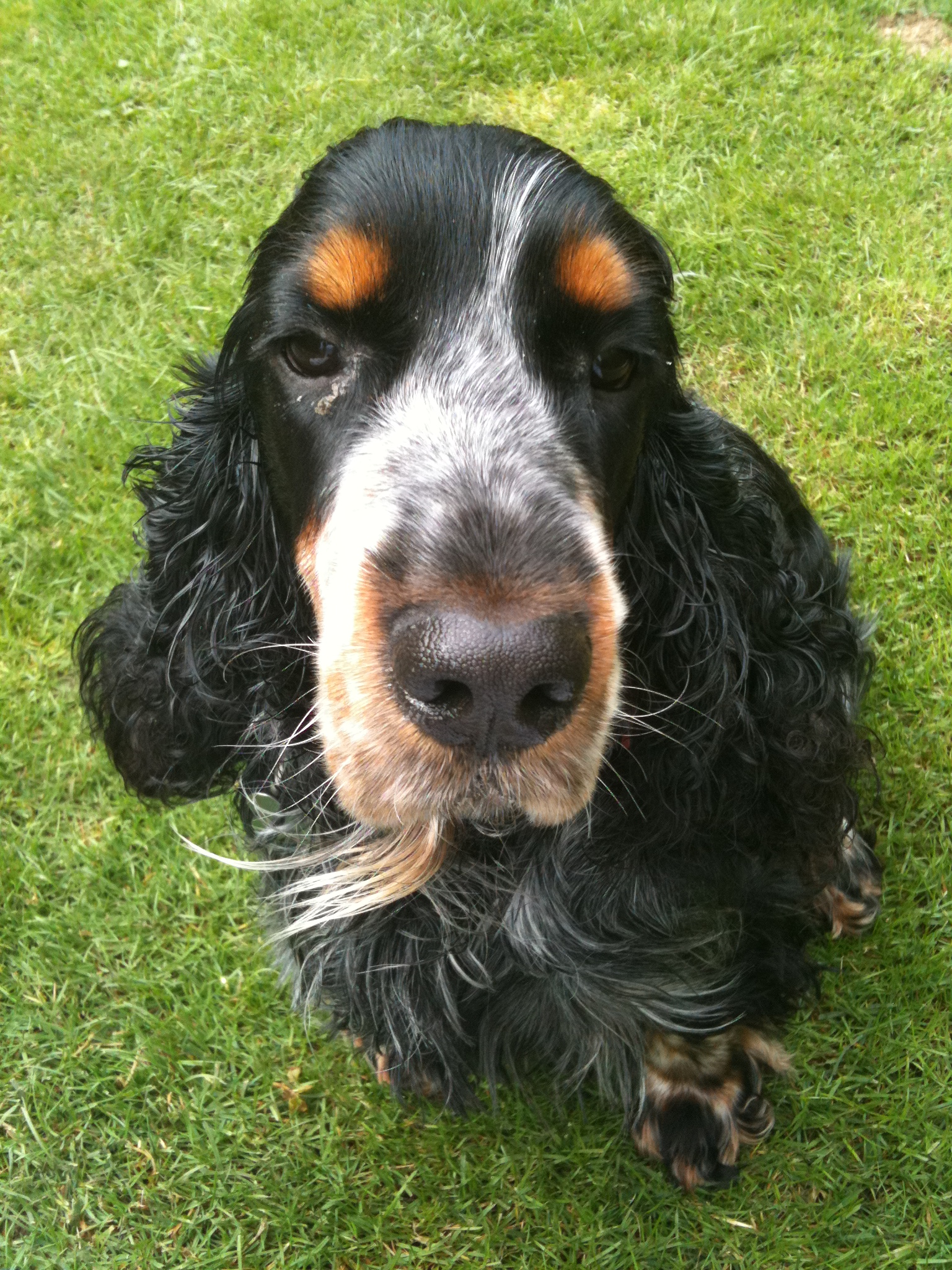 Gordon remembers: ‘He was our first child. The classic test before we took the plunge with kids credit: Gordon Smart

He just loved them unconditionally — a love that was reciprocated in full.

To his dying day, we never saw him bare his teeth once in anger. Even when his tail was being pulled or he was being turned into a unicorn with glitter and glue.

When I worked for The Sun I thought I had learned how to cope with big decisions. How to keep a cool head in a crisis. How to bury my emotions when I was confronted with pain. But never before have I been reduced to rubble as I have been for the last week.

My children have never seen me cry, and that has been one of the hardest parts. After we left Fletcher behind, we took the kids home and I just crumbled. A big ­wobbly, slobbering, shambles of a man.

The comedian Billy Connolly would talk about people doing their “real laugh”. You know, the one that comes from somewhere you can’t quite believe?

Well, my real cry came out this week. The first time I can remember since Mary died. My wife has held it together but she knows when I go back to London, the kids are at school and she’s in the house alone without her best friend, the tears will flow.

As I write this, I would give anything to have one more day of Fletcher’s ­madness, one more complaint from a neighbour who he’s jumped on while covered with mud.

Our Last Walk Together

I took him up the hill behind our house for the last time on Christmas Day and it was like he was a puppy again. 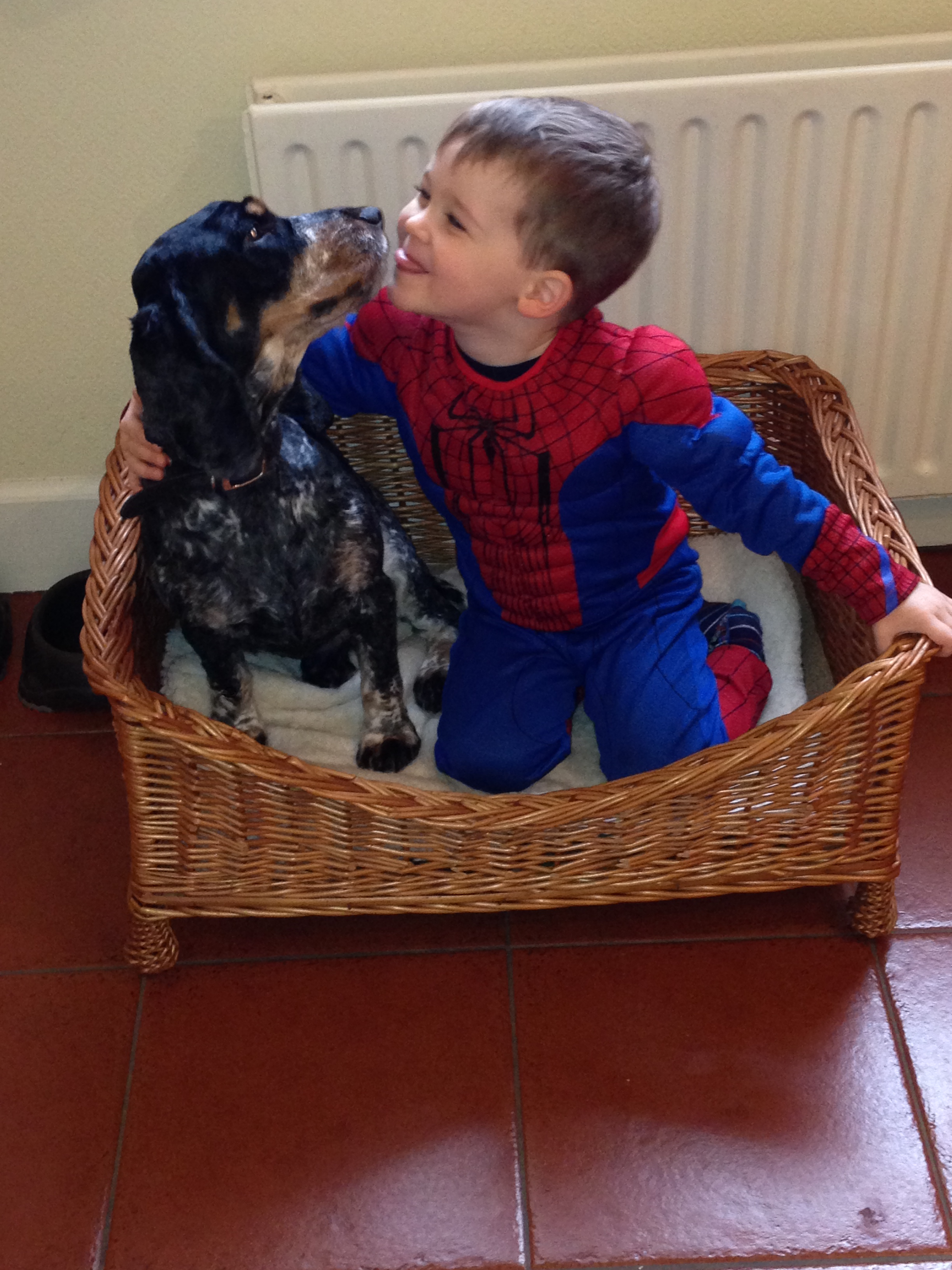 Gordon says: ‘My children have never seen me cry, and that has been one of the hardest parts credit: Gordon Smart

We held him close, took some pictures and, as he took each step, a tear fell from my eye as it dawned on me that it would be our last walk together.

Fletcher, you were the best friend we could have dreamed of and we will never, ever forget you, my boy.

Especially that bloody morning alarm call. He laments: ‘I would give anything to have one more day of Fletcher’s ­madness’ Said Gordon 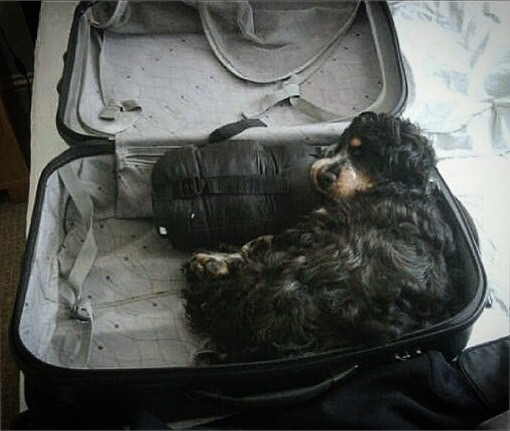 Gordon concludes: ‘Fletcher, you were the best friend we could have dreamed of and we will never, ever forget you, my boy’ Credit: Gordon Smart

Talking about the pain of your pet dog’s death. Sandra Palmer-Snellin January 2020 Staglers.

Coping with Losing a Pet