Welcome to Staglers!  John has been working behind the scenes to ensure the 2013 deer antlers will be turned into dog chews by collecting, cutting, sorting and labelling before being boxed or packaged and sent to your door. We hope you like our Company as much as we are confident your dog will love their dog chew.

Below is more information on deer for you and we will also bring you children’s facts. 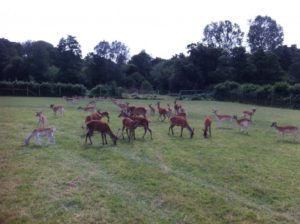 ANTLER & DEER FACTS: Antlers are found on all members of the deer family (Cervidae).

Antlers are true bone and are composed primarily of calcium and phosphorus and are deciduous. Deciduous means antlers are dropped or shed and grown anew each and every year. They grow from pedicels located on the frontal bone of the skull. The pedicels which begin growing at a couple of months of age in buck fawns provide the base from which the antler will grow. Deer grow their first set of antlers when they are approximately one year of age.

Antlers are often called “horns”, but they are not. (Horns are found on sheep, goats, and cows and are formed from hair-like tissue that grows over a bony core and are not shed)

The annual antler cycle is ultimately controlled by testosterone in the males. Growth of antlers typically begins in April in response to increasing day length. In fact, antler growth is one of the fastest known types of tissue growth in mammals, and a deer’s antlers can grow at a rate of ¼ inch per day. Antler growth begins by a bud forming on the pedicel.

Within a month the first tine (pointed section) or brow tine will have begun to form or split off. Approximately a month later, the second tine (G2) will have begun to form. In just four months, the antlers are fully developed. During the summer months of antler growth, bucks live in reclusive bachelor groups and restrict their movements.

When the antlers are growing, they are full of nerves and blood vessels and are covered with a hairy skin covering tissue commonly called “velvet.” Antler growth is amazing. During the early summer, deer antlers are soft to the touch or spongy. Towards the middle of summer, as the form is being finished, the deer begins to “pour” the bone.

By late summer, as day length decreases, testosterone levels begin to increase, the form is filled, and the antler begins to harden. Finally the blood vessels within the antler itself are filled and lose their ability to nourish the velvet, and it dries up and falls off. The velvet is typically totally removed in a day, and some of it may be eaten by the buck. Contrary to popular belief, deer do not rub their antlers on trees just to remove the velvet.

Hard antlers remain on the deer through the peak of breeding called the rut. Both antlers may fall off at exactly the same time, or one antler may be held for weeks or months after the first antler is shed. Large antlered older bucks typically shed their antlers earlier than young small antlered bucks. This may be due to the large amount of energy they expend during the rut. Similarly, deer in good condition typically hold their antlers longer than deer in poor condition.

Antler size is determined by three factors: age, nutrition, and genetics. Age is the simplest factor and also easy to manage. Simply put, as a buck gets older, his antlers get bigger.

AMAZING FACT: The skin or tissue that develops at the top of the pedicel reacts to hormones in the deer body and actually causes an antler to grow/develop. The most interesting aspect of this antler growth tissue is that, if it is surgically removed and grafted to another part of the deer’s body, an antler will grow there. For example, it would be possible to surgically produce a unicorn deer or a deer with 10 antlers growing out of its skull or any other part of the body.