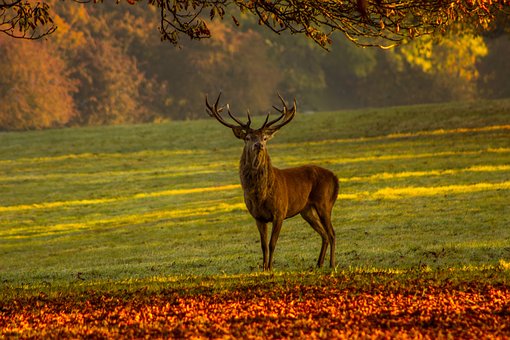 ‘Antlers in the Rut’, what’s that all about then? I’ll try to dispel some myths. So, what exactly is Deer Antler made of…???  It must be bone?  Is it the hair?  Then surely horn or is it similar to fingernails?  Perhaps something else entirely…..???

Well, go to the top of the class if you said ‘BONE’ – Yep, that’s exactly what it is, and its actually a bizarre extension of the skull…!!

The antler is joined to the skull by the ‘pedicle’, sometimes referred to as the ‘coronet’ owing to its crown-like appearance.

It’s All About The Stags.

The Stags start growing their antlers around mid-April, and by mid-September, they proudly show off a completely new set!!  But why…??  Well, two main reasons – to attract a mate or two (let’s be honest, they do look pretty impressive) and to fend off and battle with other Stags that have similar ideas….

Amazingly, with the right diet, heavy in proteins and minerals, the antlers can actually grow up to an inch a day!!  And yes, in general, the larger the antlers (more points) therefore the older the Deer.

It’s a busy old time for the Stags whilst growing these natural wonders. They must gorge on any available food and get themselves in peak condition prior to the breeding season (the ‘Rut’) at the same time using up valuable energy battling with other Stags. It is the most important time of the year in a deer’s calendar and happens all over the world. Deer Battle For Dominance | Wild Japan | BBC

What Happens After The Deer Rut?

Once the Rut is over, usually around mid-November, the Stags are totally exhausted and in very poor condition having eaten little if anything whilst maintaining their harem of ladies and day to day challenges from other aspiring Stags.

The Stags winter is spent regaining the lost condition, eating as much as is available to ensure they are ready to repeat the whole cycle again the following year.

Do Deer Antlers Fall Off Naturally?

Yes, antlers naturally fall off (often referred to as ‘cast’ or ‘shed’) in March or April and there are often a few days/miles between the first and second antler being cast, therefore making it incredibly difficult to find a matching pair!!

Then of course – we’re back to April, go to the top of the page, read all over again, and so it goes on, year after year.

Thank you, Mr. Stag, for unwittingly sharing your magnificent creation. So it is a proven fact that the antler you buy your dog is grown with care, thoroughly crash-tested on other stags then discarded when not needed.

We are not harming the planet by wasting them as we recycle them. Have you ordered yours?

‘Antlers in the Rut’ what’s that all about then? John Palmer-Snellin. Director